Myocardial Viability Imaging: An Attractive Idea Without the Clinical Outcomes to Back It Up

Guest Bloggers:
*****
Heart failure is increasingly common and presents a major clinical and public health challenge.  Coronary artery disease is the leading cause of heart failure in the United States, causing myocardial injury leading to reduced systolic function and ultimately heart failure.1  It was first demonstrated in the 1970s that dysfunctional myocardium in the setting of coronary artery disease could be coaxed back to life using an infusion of epinephrine.2  This dysfunctional myocardium that could regain function was termed viable myocardium.  Subsequent studies have shown that coronary revascularization provides more durable improvements in systolic function and superior clinical outcomes.
Advancements in cardiac imaging and understanding of underlying pathophysiology have demonstrated that dysfunctional myocardium exists on a spectrum of myocardial stunning, hibernation and necrosis/infarction. Myocardial stunning, occurring with acute ischemia with no ultrastructural changes of the cardiac myocyte, recovers in minutes to days after revascularization while myocardial hibernation, occurring with chronic ischemia, requires weeks to months for recovery of systolic function due to extensive ultrastructural changes of the cardiac myocyte and disassembly of the contractile apparatus. Identifying patients with stunned or hibernating myocardium, as opposed to truly irreversible myocardial necrosis is of utmost importance as patients with significant amounts of viable myocardium may see marked improvement or even normalization of their ejection fraction following successful revascularization.  Patients who are typically evaluated for myocardial viability have significant systolic dysfunction, known or suspected coronary artery disease, candidates for revascularization, and no definite angina (which would provide a separate indication for revascularization).

Nuclear imaging is frequently used for the assessment of myocardial viability. SPECT imaging at rest with either Thallium-201 or a Technetium-99m agent is commonly used for this indication.  While these radiotracers are typically used for perfusion imaging, cellular uptake requires active metabolic processes that indicate viability.3  PET imaging using a glucose analog (fluorine-18 labeled deoxyglucose; FDG) has particular advantages in addition to the improved spatial resolution of PET compared to SPECT.  Ischemic myocardium favors glucose metabolism and specific patient preparation, most commonly done with oral or intravenous glucose loading typically with supplemental insulin administration, reliably shifts cardiac myocyte metabolism to glucose utilization (as opposed to free fatty acids, which are the major alternative to glucose as an energy substrate).4   The presence of glucose metabolism implies viability and studies have shown that FDG-PET imaging is the most sensitive technique for the detection of viable myocardium.5  Pairing the glucose metabolism images with perfusion images, obtained using either PET or SPECT tracers, allows additional classification. FDG uptake with decreased perfusion (“PET mismatch”) represents viable myocardium, whereas a concordant decrease in FDG uptake and perfusion (“PET match”) represents necrotic myocardium.

These promising observational results subsequently led to randomized clinical trials to better define the mortality benefit of revascularization in those with viable myocardium.  Three randomized, controlled trials have been published to date that have examined the utility of viability imaging prior to revascularization (Table).8-10  Unfortunately, all have shown no mortality benefit.  Why is this?  Observational studies often have confounding factors and biases that are removed in the context of a randomized, controlled trial.  In this case, we suspect that selection bias is the major factor in the difference between the observational and randomized, controlled data.  In clinical practice, cardiac surgeons and interventional cardiologists can readily identify high risk patients who are at likely to have bad outcomes.  In an observational study, these high risk patients are frequently consigned to medical therapy instead of revascularization while randomization removes this bias.  Anecdotally, viability studies are seldom ordered in low risk patients who are good candidates for revascularization, while they are much more commonly ordered in high risk patients to help determine if revascularization is worthwhile.  The utility of viability imaging in this context has not yet been evaluated, but the randomized trial data does not suggest that this strategy leads to favorable outcomes. 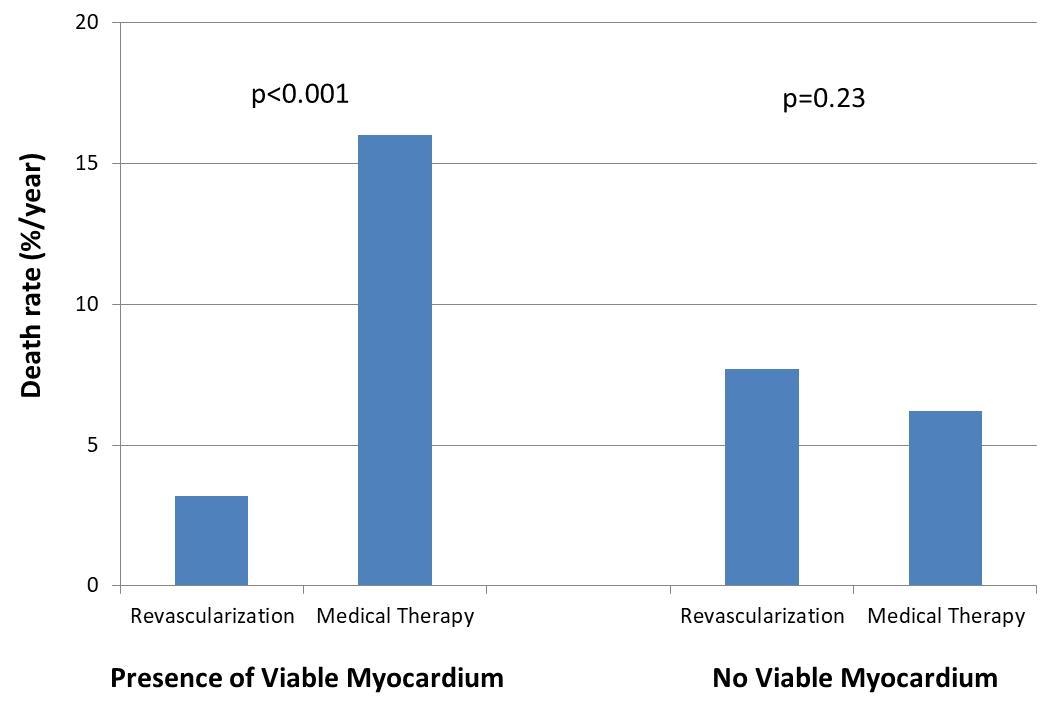 Thomas Hauser is Director of Nuclear Cardiology at Beth Israel Deaconess Medical Center and Assistant Professor of Medicine at Harvard Medical School, both in Boston, MA.  He is a volunteer on ASNC's Social Media Committee.  Dr. Hauser's has previously published work on the use of nuclear imaging, CMR, and cardiac CT in cardiovascular disease.
@ThomasHauser_MD